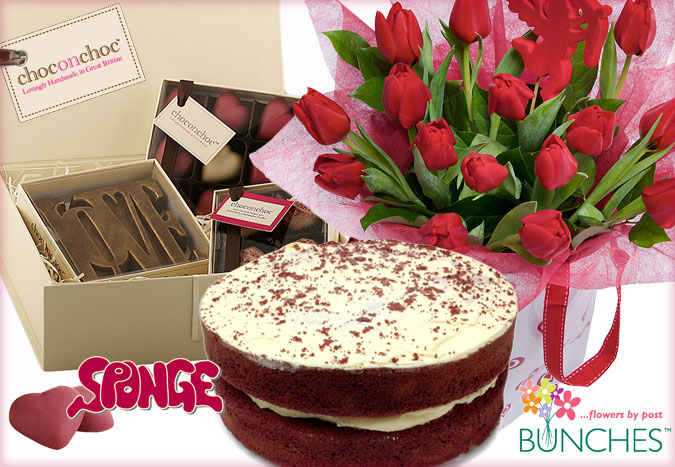 With one week to go until the most romantic day of the year, we’ll all be crossing our fingers that there will be a special delivery to look forward to. If a flurry of cards and flowers landing on your doorstep is about as likely as George Clooney turning up, however, don’t despair, because our friends at Bunches, Choc on Choc and Sponge are ready to spoil one lucky person to a bundle of wonderful treats. Enter our scrumptious competition for your chance to win the gorgeous goodies pictured above, delivered to you on Valentine’s Day.

While you’re at it, why not try your luck at this week’s Dorset Cereals Spin to Win game, where you could win one of our Eglu Classic Chicken Houses. 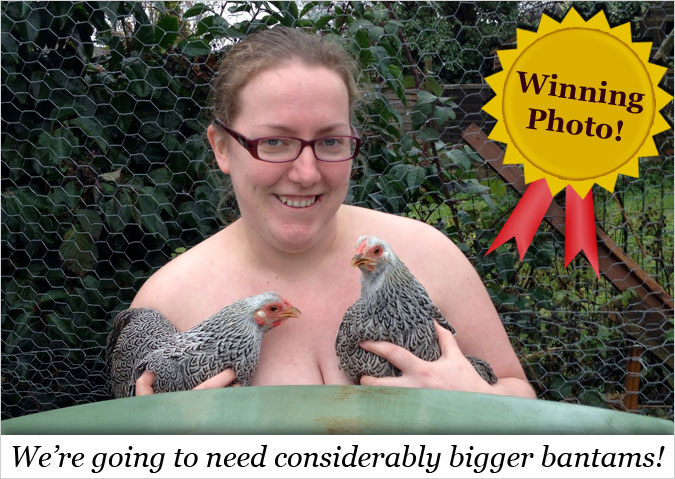 Thanks to everyone that entered last month’s Funny Chicken Photo Competition. We had some eggcellent entries featuring hilarious hen hairdos, impersonations of pet pals and several bird-like barnets on owners heads. But, there could only be one winner, and it was an obvious choice. Hayley Hobley’s impressive pair (of hens) had us cracking up, and we thought her gutsy snapshot was well deserving of the £50 voucher prize.

Hayley did eggsplain that her photo had been taken for a Christmas present calendar, and she doesn’t make a habit of getting her bantams out. We eggspect they might make an appearance at Easter though… 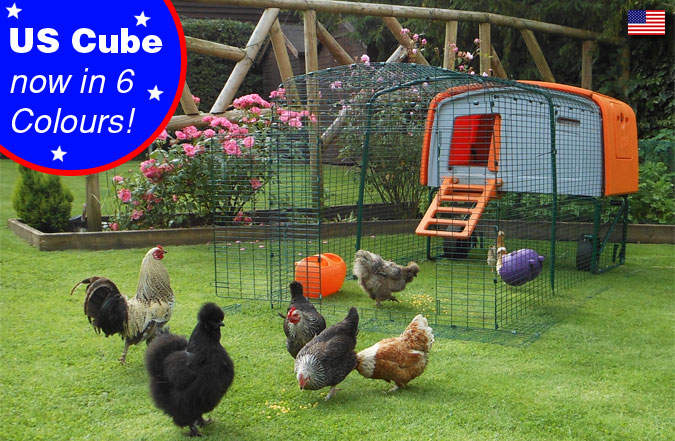 Eglu Cube now Available in 6 Colours in the US

Eggciting news for our friends in the US – the Eglu Cube Chicken House is now available for pre-order in all six colours. As well as the Cube in Green, Red and Purple, you can now choose from tangerine Orange, daffodil Yellow and pretty powder Pink. Whichever colour you go for, you can be certain that it will brighten up your backyard a tweet and stand out from every other chicken coop on the block.

The Eglu Cube houses 6-10 chickens comfortably. It is quick to clean, easy to move and complete with a predator-resistant run. Order your Cube in Red and Green today for quick delivery, or pre-order any other colour for delivery in April (perfect timing for Easter). Click here to choose your colourful coop! 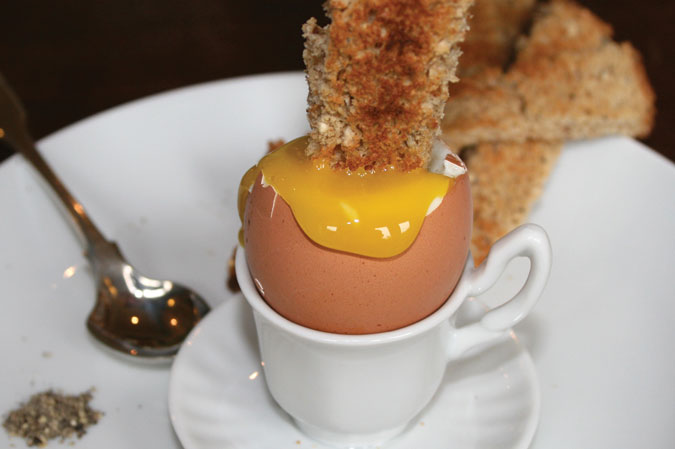 Everyone knows that a boiled egg and soldiers go together like tea and biscuits, fish and chips or Dolly and Kenny, so it’s fantastically fitting that a group of real soldiers recently broke a boiled egg record. Eggs are a great breakfast for troops, which is why 178 soldiers at a Gloucestershire Barrack lined up for the challenge last week. The soldiers had to dip their toast soldiers in to their boiled eggs simultaneously, signalled by a commanding officer shouting “dip, eat dip”, and they broke the record for the most people dipping at once. As well as raising money for charity, we have a feeling the soldiers rather preferred this to their usual morning eggsercise. 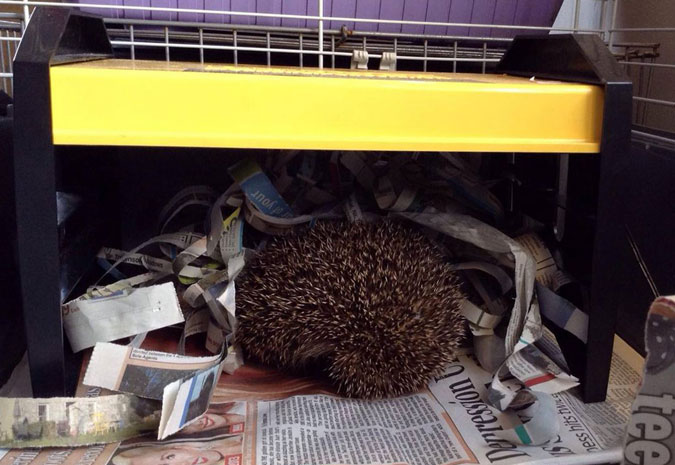 It’s not just chicks that are using the EcoGlow Chick Brooder to keep warm, it’s hedgehogs too! Diane South, from Prickles & Paws Hedgehog Rescue and Rehabilitation, told us that she uses an EcoGlow for young and sick hedgehogs that need a constant heat source. She has found the Brooder to be so useful that she has just bought another one, and both are now in constant use.

Diane started running Prickles & Paws, from her home in Cornwall, three years ago, after her daughter, who studies animal welfare, was given two youngsters to nurse back to health. Diane and Katy both became hedgehog carers with the British Hedgehog Preservation Society and they started looking after more and more hedgehogs until lack of funding meant they could become a charitable organisation run by a committee of trustees. Over the last year they have helped almost 80 hedgehogs, many of which have been brought in very ill, or only a few days old, and they aim to release all hedgehogs back to the wild, in safe locations near to where they were found.

You can keep up to date with the hedgehogs’ progress on the Prickles & Paws Facebook page. 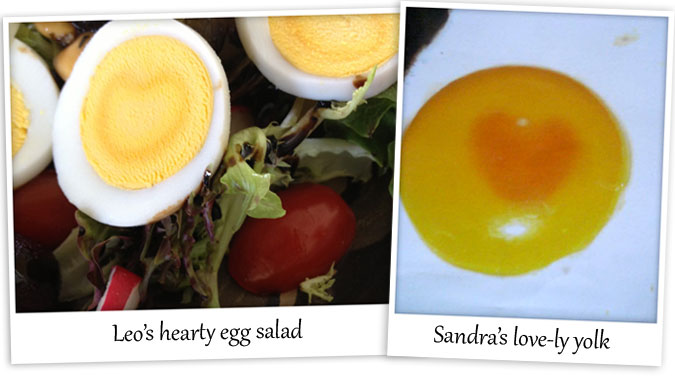 With one week to go until Valentine’s Day, it would appear that several chickens have been getting into the romantic spirit. Although we haven’t heard of any hens queuing up in Clintons or arranging candlelit dinners yet (do tell us if you know otherwise), we have been tipped the wink that some casanovas have been ‘laying’ on eggstra special treats for their owners – eggs with hearts in.

Sandra spotted a heart shape in the yolk of one of her hen’s eggs when she recently cracked in, and Leo discovered a similar outline in his hard-boiled eggs when he sliced them for a hearty salad.

In the days leading up to February 14th, we want to know if your hens enter into this eggstraordinary activity too. Send your photos to stephanie@omlet.co.uk, or post to Facebook or Twitter. And, if you’re not lucky enouf to be treated to a romantic egg, you could always use our heart-shaped egg poacher instead! 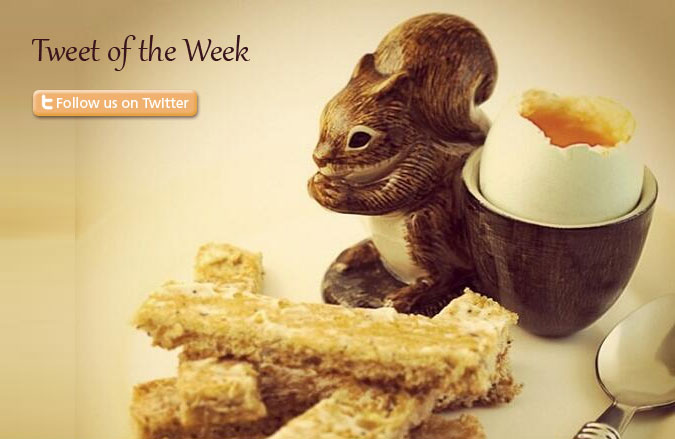 “@omlet Had a nice boiled egg for breakfast, in my new squirrel egg cup – thanks again 🙂 x” (@Ms_Scatty)

This week’s TOTW comes from boiled egg fan Ellie. She won her Squirrel Egg Cup through one of our Twitter competitions, and if you follow us, you could win terrific prizes too!

We have a family of Squirrel Egg Cups hibernating at Omlet HQ, so if you’re nuts about eggs, you can pick one up for yourself here! 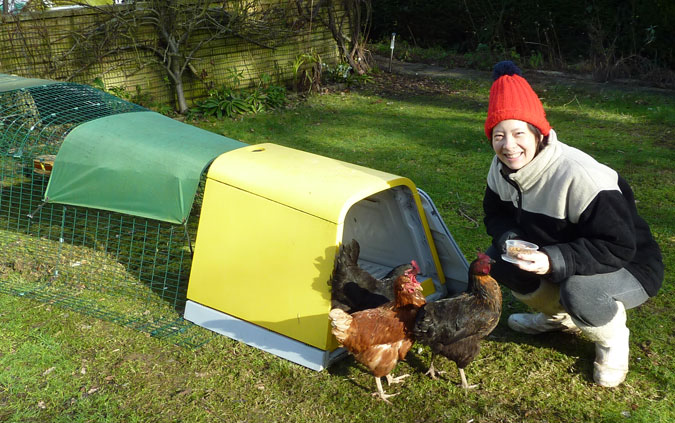 What Eglu do you have? I have an Eglu Go which I consider to be an eggcellent coop. I wash it thoroughly once a month both inside and out, to ensure nasties are kept at bay and the hens have a clean place to sleep and lay. However, being strong plastic, the Eglu is unlikely to get nasties in it. I move the Eglu every two to three days so the girls have a new patch of grass to graze on and the old grass has time to regenerate. The girls are very happy both inside the coop and outside whenever they can get out.

What’s the best thing about keeping chickens? Having eggs every day that I know are organic and healthy because my girls are healthy and happy and get nothing but organic food.

What’s your favourite egg dish? I have one or two fried eggs every day, but I also love to have scrambled eggs with a touch of sesame seed oil.

What do you do when you’re not with your hens? My day job is as a secretary, but I am also a health therapist and part-time property investor. When I am not working, attending courses or taking care of the girls, I love to do crochet and knitting. 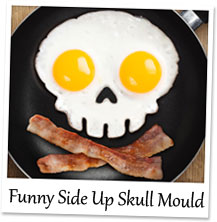 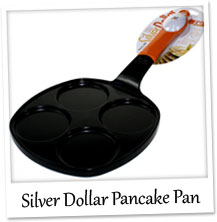 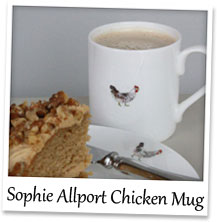 Funny Side Up Skull Egg Mould – Well, shiver me timbers, how’s this for a breakfast bounty? Use this skull mould for eggs that are bad to the bone and add bacon crossbones for a breakfast that pirates would be proud of.
A fried side of fun for just £7.95

Chicken Solo Mug by Sophie Allport – This splendid bone china mug features an adorable speckled Maran chicken print. You’ll find one hen nesting on the front of the mug, one on the back, and one hiding on the inside.
An eggcellent gift for just £8.50

This entry was posted in Pets on February 12th, 2014 by admin