The offer of attending a demonstration of cooking at the Royal Institute by Hervé This and Pierre Gagnier was too good to resist last week.  Hervé is the founding father of the science of cooking known as molecular gastronomy and Pierre is a world renowned Michelin starred chef so the chances of picking up some fancy moves in the culinary department were high. The show didn’t disappoint as Hervé showed the possibility of writing recipes with equations to produce infinite variations and Pierre attempted to make something edible out of these chemical formulae.  Afterwards, the man from Omlet introduced himself to Hervé who was delighted to share this interesting fact for egg lovers:  you can cook an egg in water forever at 60 deg ‘C and it will never change state, but if you raise the temperature to above 61 deg ‘C then the white will start to coagulate.  For a perfectly tender egg you should cook it at 65 deg ‘C, never boil it!

You can find out more about this here  https://www.pierre-gagnaire.com/anglais/cdmodernite.htm

Thanks for everyone who has been along to the shows in Newbury and Malvern last weekend, especially Clare and Mary, two fantastic eglu owners who came along and helped on the Omlet stand.  If anyone else is interested in helping at shows just email johannes@omlet.co.uk

We will be at the Ardingly Show ground this weekend with a full compliment of eglus, chickens and rabbits, you can find out more here https://www.seas.org.uk/shwidx.asp?ID=3  this may be our last show before Christmas so if you want to see an eglu in real life come on down!

You can see an eglu  at the South of England Show 1st /2nd of October. Katie and her chickens Kitchen Invaders!  If you see these chickens in snooping round your kitchen please report them to Omlet on 0845 450 2056.

There was a question about dustbaths on the forum this week and as my girls love a good roll about in the dirt, I thought I’d tell you all about theirs. They have a special tray with sandy soil in which they use to dustbathe in. It is simply a large greenhouse tray with nice high sides which keeps the soil more or less contained. They all love to lie in it and twist, turn, roll and kick the sandy soil all over them to allow the dust to come into contact with their skins. This helps to rid them of skin parasites and keeps their feathers in good condition. I add a sprinkle of louse powder or some Diatom to the dustbath every few weeks because the hot summer weather brought forth creepy crawlies which make the hens lives a misery with the unpleasant itching. Dustbaths don’t have to be formal in construction although it is a good idea to have them somewhere where they will stay dry for all weather dustbathing. Hens will make use of flower beds or sandpits in exactly the same way and will lie dozing in the sun covered in soil! This week, my girls have made decided to use my vegetable garden which is now empty and have left me lovely hen shaped holes all over it.  Dustbathing must be a wonderful thing to do – you only have to look at the blissful way they roll about flicking dirt everywhere to know they’re enjoying every minute. I don’t think I’ll be giving it a try though.

A worried Sara wrote “Hi, Got our first soft shelled egg this morning (found it in the dropping tray). The last couple of eggs have had thin shells as well. I’ve looked in several pet shops and can’t find any grit, does crushed oyster shell do the same thing as grit? I have being sprinkling crushed up baked egg shells in the run for a while, but obviously it hasn’t worked.”

Replies from the forum include:-

“Yes the oyster shell does the same thing as mixed grit in providing extra calcium for the egg shells. You might like to add some to the food peanut or put it in a little dish – I’m quite surprised at the frequency with which I see my girls dipping into their grit container. Grit also supplies hard less soluble bits which all birds need for their gizzards to grind up food properly. Free range birds would be able to pick up bits of grit from the ground to do this.” – Motherhen

“Even though ours are part time free-rangers, we tend to buy bags of mixed grit with oyster shell and sprinkle it in the run – we’re amazed at how quickly it goes! (not as quick as grapes or corn of course” – Mel and Paul Marvin

“I was going to suggest you ask your local pet shop to see if they could get hold of some for you. It is hard to come by – we’ve had trouble finding some in Leicester. Luckily we found a big bag of the stuff in Melton which has kept us going for 3 months and there’s still loads left. Good luck with the soft-shelled eggs. If the girls new to laying I would put it down to them being immature and they will definitely get better at it as they start to get older now, and especially with the extra grit you’ve got.” – Gina

“I asked someone I knew who used to keep chickens about soft-shelled eggs, and she said she had only seen one or two in her life. I suspect that these soft-shelled eggs are more noticeable to Eglu-owners because they show up so well in the droppings tray, where the hens can’t get at them and eat them. The first soft-shelled egg that I saw was dropped on the grass by my hen, and the pair of them hoovered it up and in ten seconds there was no sign of it. If I had not been fussing over my hens like a new mother, I would not have known anything about it. I get eggs in the approximate ratio of five hard-shelled to two soft-shelled, and am not worried about it. I have never found a soft-shelled hen in the nest: my hen is sensible and treats them like droppings. I am giving my hens baked crushed eggshell and I am confident that things will sort themselves out as my hens get older”. – Gallina My name is Siân Morrison, I am 13 years old.

Before we got the chickens we were going to call them Betty and Ethel but when they came the neither looked like an Ethel. The Gingernut looked like a Betty so thats what we called her. The Pepperpot ended up as Penny. They are now called Penny and Fudge.

The question you missed is ‘What are your chicken’s favourite treats?’, Penny and Fudge like grapes. The chicken formally know as Betty

How to relax a rabbit
Emma Magnus has an uncanny ability to connect with animals. She approaches rabbits with a clarity of thought that makes understanding easy and then goes on to suggest superbly practical solutions to questions that really hit the spot. Although slim this book manages to succinctly cover topics from choosing a rabbit, introducing rabbits, handling, litter training and understanding your rabbits behaviour. Well worth taking the time to read through.

Are My Chickens Too Cold? 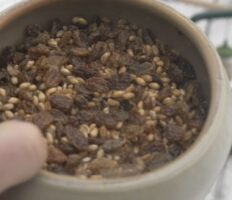 Warming Winter Breakfast for Your Chickens