We’ve heard of beef sausages, venison sausages, and sausages with stilton in them, but never before had we heard of egg sausages. That is until now, because Fiji has just produced the world’s first sausages made from egg. It all sounds very odd, but when the Ram Sami stall unveiled their first batch of egg sausages last Friday crowds were fighting their way to the booth to get a look at the new product.

According to the company’s quality assurance officer the contents of the sausages are 100% egg based, held together by collagen and vacuum packed like other sausages. They have the same nutritional content as a boiled egg and they make a healthy alternative to regular pork sausages.

There was a lot of interest from the public so they might well prove to be a real hit in Fiji. All we want to know is do you boil them, fry them, poach them or grill them?

The USA has been hit by a heatwave recently, and last Friday a temperature of 115 degrees was recorded in Washington D.C. Now, that is hot by anyone’s standard, but is it hot enough to fry an egg on the pavement? Well, the research team at the Herald-Mail decided to find out!

The team spent 35 minutes attempting to melt chocolate bars and crayons as well as trying to cook eggs, with a variable amount of success. According to eggsperts an egg needs a temperature of 158 degrees to become firm, so when they cracked their egg onto a 120 degree pavement, the yolks began to solidify, but the liquid did not turn white. Meanwhile, within half an hour the crayons had started to melt onto the pavement, and the chocolate bar became pure liquid.

So, is it hot enough to cook an egg on the pavement? Apparantly not – but do let us know if you have ever managed it!

Contest in China to Beeware of

Bee-ing covered from head to toe in bees isn’t most people’s idea of fun, in fact it’s more like a nightmare, but in China people have been competing in a ‘bee-attracting’ contest. The aim of this competition: quite simply, to see who can attract the most bees onto their body. Sounds…terrifying.

Wearing just a pair of shorts, and with a queen bee they reared to attract the swarms, the entrants have to stand on weighing scales and wait as they get covered in bees. Whoever gains the most amount of weight in bees is the winner, and in this case the prize went to Mr Wang, for attracting 26kg of bees in one hour. Although this sounds like an enormous amount of bees, the Guinness World Record is held by a US citizen, who attracted 39.5kg of the insects. Unbeeliveable! 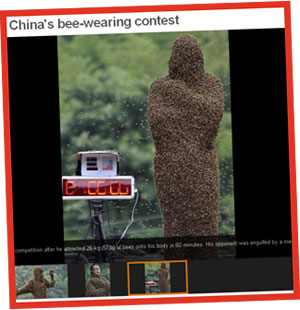 When Mr Wang heard that royal jelly could make his skin look younger, he couldn’t wait to hive a go!