Philip sent us a great picture of his Beehaus this month. The green Beehaus is a buzzing hive of activity, with his year two colony hard at work, and we think they must be enjoying getting out in the sunshine after the rainy weather we had in early May.

We love seeing photos of the Omlet products being enjoyed by people and pets, and uploading your pics to the website is easier than ever. Just find your product on the website and click on ‘Upload a Photo’. As long as the photo isn’t too dark or blurry we will use it on the website and pay you £1 for each one. If that wasn’t good enough, we will choose one photo every month to win a £50 voucher! So snap those eglus, aprons and egg cups and start earning some eggstra cash today! 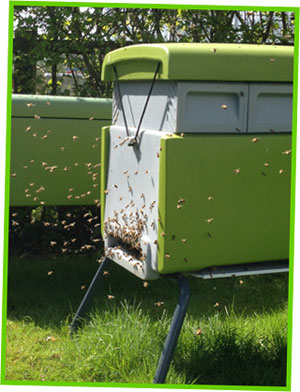 The Beehaus got a storming review on the Talking With Bees blog last week. Rated a 5 out of 5 by blogger Roger, the verdict was “this is the beehive that I would buy if I lived in the city, lacked space or only wanted one hive.”

This beekeeping genius bee-lieves that the benefits of the Beehaus include allowing easy inspection of the bees, ergonomic height, light supers, good sized brood chamber, triple insulation and good swarm management (to name but a few). This chap knows what he’s talking about…

Talking with Bees is a buzzing blog written by a man that thought beekeeping could be the key to sanity. It seemed to work for him, so if you want to give it a go, why not introduce your own Beehaus to the garden this Spring? Click here for more info!

A Sweet Offer for Everyone

It was National Honey Week earlier this month, and we missed it, doh! But we thought we’d have a bee-lated celebration with an offer on our delicious jarred honey. This week get 25% off the Cotswold Creamed Honey and Pollen Enriched Oxfordshire Honey and enjoy the sweet taste of honey at an even sweeter price. Honey is great on toast, in cakes and drizzled on your bowl of porridge, but a spoonful can also help keep the doctor at bay, because it can help to prevent hayfever.

To get your discount, simply add your honey to your shopping basket and enter this voucher code: HONEYOFFER25 Offer valid until 31st May.

Have you got worms? We have, and we LOVE them! It’s all thanks to the new Hungry Bin Worm Composter which is the latest addition to the Omlet website. 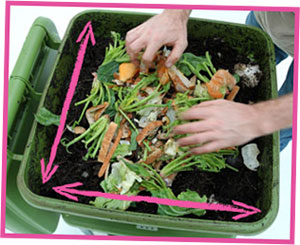 It’s a really fast way to compost. Hungry Bin can process up to 2kg of your kitchen leftovers and garden clippings a day. 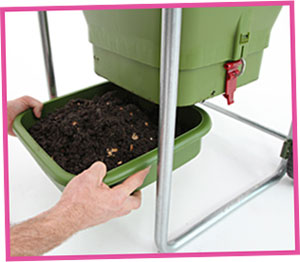 What’s your favourite way to eat eggs? Many are partial to a poached egg, some are barmy about boiled eggs and most people agree that fried eggs are fantastic…but how do you fancy the sound of 3 month old, green, gelatinous egg? No, it’s not our cup of tea either, but believe it or not this is considered a delicacy in China.

Known as the Century Egg, this speciality is produced by preserving eggs in a mixture of clay, ash, salt, lime and rice hulls for anywhere between a few weeks and several months. The yolk turns an appetising shade of dark green and the white transforms into a brown, translucent jelly. A strong sulphur odor develops (ie. a very eggy smell indeed) and it becomes full of flavour (apparantly), but if that didn’t make you cringe ‘enouef’, the Century Egg is commonly added to a bowlful of rice porridge for breakfast.

It all sounds rather stomach-churning, but on a recent trip to China, an Omlet Director tasted this delicacy, and the verdict…well, it wasn’t too bad!

So, have you tried any wierd egg dishes? Let us know, and even better, send us a photo!

The Black Honeybees are Back!

Up until recently, it was bee-lieved that black honeybees were only still living in a few places in the very north of Britain, but they have recently been discovered in North Wales, East Anglia and West Sussex too. Previously feared to have died out in most of Britain, this is very exciting news for beekeepers everywhere.

The native honeybee was virtually wiped out 100 years ago, by a virus, leading to European bees filling the void. It has long been argued that native bees are important for biodiversity, so a black bee conservation project began in 1997. Although only 1% of UK hives are likely to house the black bee today, it is extremely encouraging that they have recently been found in different areas.

Bee experts hope that the black honeybee could be the key to reversing the decline in honeybee numbers, because it is better adapted to the British climate than the European honeybees that many beekeepers use. Evidence has been found to support the idea that black honeybees have a higher survival rate than European bees, as they are a hardier breed. They are much darker and have evolved thicker, longer hair and a larger body to keep warm in cooler climates. They also have smaller populations going into Winter, which means they need less food for the colony and have a better chance of survival.

So what next? Well, the president of the British Beekeepers Assocation already encourages its 22,000 members to do local breeding instead of importing, but the Professor of Apiculture at Sussex University, says “What is needed now is a large-scale queen-rearing programme on a commercial scale.” Bibba hope to have black honeybees readily available for sale within three years which could ‘bee’ a huge turning point for British honeybees and their keepers. Bee-rilliant!

This month we are eggcited to have been mentioned in two magazines. First, there’s a great article on keeping chickens in the May edition of Sainsbury’s Magazine. Elizabeth Aitken eggsplains why she first decided to get chickens, how she chose their housing and why she loves getting fresh eggs every day. Elizabeth’s a vegetarian, so eggs are a great source of protein in her diet, and she says that her own hens’ eggs have ‘the brightest yellow yolks imaginable’. Obviously, Elizabeth decided on an Eglu as her choice of chicken house because (in her own words) ‘it is practical, secure, well-insulated and easy to move.’ And she was pleased with the delivery too, saying ‘a lovely chap from Omlet delivered it, erected it in the garden and gave me some good tips about how to introduce the birds.’

What other eggscuse could you need to treat yourself to a shiny new Eglu?

Meanwhile, stylish, glossy publication The London Magazine has featured one of our smaller products, the Robot Salt and Pepper Shakers. Sat alongside a £510 gilt salt pot and £485 pepper pot, our funky robots area real bargain at £16, and we think they are far more fun! After all, what other salt and pepper shakers can you wind up and watch walk across the table?