The Victoria and Albert Museum houses the largest collection of art and design in the world, across 145 galleries and 13 acres of space in the centre of London.  Home to priceless pieces by Faberge, Michaelangelo, Charles Renee Macintosh and Frank Lloyd Wright to name a few it’s not exactly the kind of place you would expect to find a couple of chickens wandering around.  But that’s exactly what you would have found if you went to the Late Nights series in August which the V&A puts on every last friday in the month.  In August the focus was on Urban Grow Your Own and as well as hydroponics, a seed exchange and disco soup, Omlet were invited to display an Eglu and chickens in the amazing surroundings of the John Madjeski garden.  A beautiful summers evening meant that the garden was packed and plenty of people did a double take as we set up the Eglu and produced two real live chickens who promptly did real live droppings much to all the kids delight.  We answered loads of questions from people all over the world who were visiting and it was great to meet so many chicken fans. It’s not the first time the Eglu has been in the V&A though, you may remember that the Eglu Classic was picked to represent great british design alongside the E-Type jaguar and Concorde during an exhibtion that ran alongside the London Olympics in 2012. 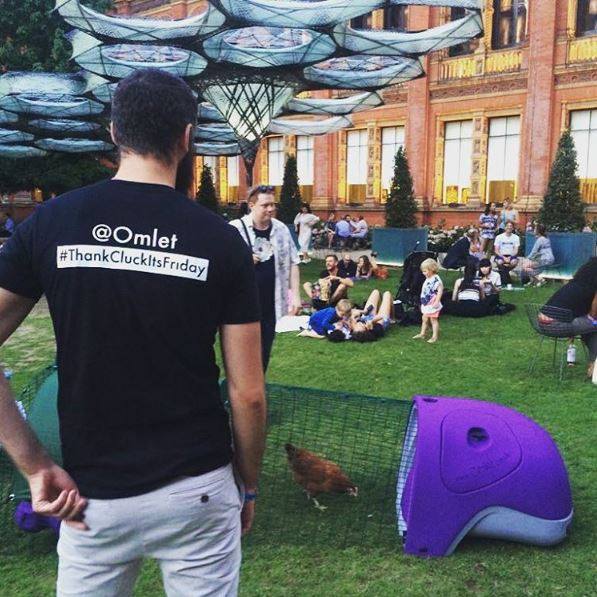