Why Are Some People Allergic To Cats? 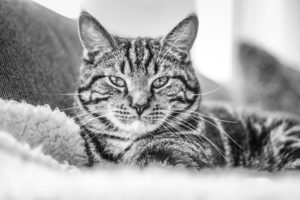 Allergy to cats is the most commonly seen of all pet allergies, almost twice as common as the dog equivalent. It’s estimated that up to 3 out of 10 people have some level of reaction to felines, but to what extent it limits peoples’ ability to spend time with cats varies greatly.

Common symptoms of cat allergy include one or several of the following symptoms after having been around a cat, or having spent time in a house where cats live:

More extreme allergic reactions are shortness of breath, severe swelling, and in bad cases anaphylactic shock. If the allergy is present but not as prominent people might at first be absolutely fine around cats, but over time experience neverending fatigue and a constant sore throat.

What causes these symptoms? 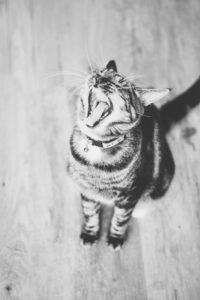 Opposite to many people’s belief, it’s not actually hair that causes pet allergies, but a protein produced in oil glands on the skin, and is found in cat saliva, urine and dander (dried flakes of skin often found on cat hair). This protein is called Fel d. The World Health Organisation recognises 8 different allergens, Fel d 1-8, and out of these, Fel d 1 accounts for 60-90% of allergic reactions. Its exact biological function is still unknown, but it sure knows how to annoy humans!

People with allergies have an oversensitive immune system that mistakes harmless things, like a cat protein, for dangerous invaders and sends out a strong attack to destroy these invaders. The symptoms allergic people feel are side effects of the body’s defence against the allergen.

What is there to do?

Male cats produce higher levels of Fel d 1 than females and neutered males. The difference is however relatively small, so if you’re struggling it probably won’t matter that much.

The same goes for so-called hypo-allergenic cat breeds. While they do work for some allergic cat lovers, they still produce Fel d 1. So if you have severe reactions to some cats, getting one that produces less dander won’t make it possible for you to live with one. The only thing you can do is to spend time with the breed you’re potentially planning to buy or adopt beforehand and see how you get on.

Antihistamines can be a help to some allergic people; if taken regularly they minimise symptoms and make it possible to spend time in a house where a cat has been. They are normally best taken preventatively, making sure the body is prepared should it come across any triggering allergens. It’s however not recommended to depend on antihistamines on a daily basis to make it possible for you to get a cat. Even if it’s sad, you might have to come to terms with your allergy and that cat ownership might not be possible at the moment.

Finally, it’s worth noting that you can develop cat allergies at any time of your life, even if you’ve never shown any signs before. Allergies are not hereditary as such, but the tendency to develop allergies is sometimes passed down from parents to their children. This means that if you’re allergic to cats, it is more likely that your child will develop an allergy to something. It won’t necessarily be to cats as well, but as it’s one of the more common allergies it’s worth letting your child spend time with other peoples’ cats before getting one yourself.